History of the FRI

The FRI was established at the initiative of the People's Commissariat of Finance (Narkomfin) on 27 February, 1937. It comprised seven divisions: budgetary, fiscal, money circulation, credit and circulating assets, consolidated balance, Soviet finance history, financial plans implementation tracking. The structure of the Institute departments and its belonging to Narkomfin clearly indicated the issues for addressing of which it was set up.

During the Second World War the Institute didn't' function. All the staff members who were fit for military service went to the front. New "Regulations on the FRI of the USSR People's Commissariat of Finance" were adopted in March 1945. The Institute took an active part in developing financial projects to recover the national economy destroyed by the war. Research staff members participated in preparation and implementation of the postwar monetary reform.

The beginning of a new milestone in the history of the FRI refers to 1956. The USSR Council of Ministers enacted a regulation on expanding its activity. The Institute became the leading centre for giving theoretical insight into financial issues and summarizing the best practices of financial authorities and banks. In this capacity the FRI took an active part in tackling the problems of increasing the efficiency of economic management and social issues in the 1960-1980s. The Institute staff members prepared materials on financial aspects of the national economy management reform, calculated financial indices for five-year plans. The annual plans of research were approved by the Ministry Board.

The FRI was included in the structure of the Economy and Finance Ministry of the Russian Federation in 1991. After the ministries had been separated the Institute was placed under the jurisdiction of the Ministry of Finance in August 1992. According to the Charter approved by the Russian Ministry of Finance in August 1998 the FRI became a state institution of economic research. During these years the Institute expanded the scope of research on the major areas of its activity, participated in drawing up new laws to develop the market economy and the corresponding financial and credit relations. It also prepared the budgetary reform including the improvement of interbudget relations and the draft law on the state financial control. The FRI in cooperation with the Institute of professional accountants of Russia (IPAR) acted as the leading agency to implement the programme of reforming accounting in accordance with the international standards of financial reporting.

The Government of the Russian Federation restored an independent status of the Institute as the federal state budgetary institution "Financial Research Institute" to create favourable conditions for development of basic and applied research in the field of economics and finance in May 2012. The Ministry of Finance has got the functions of the founder. 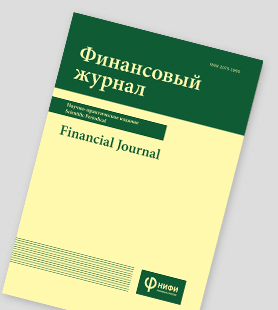